DETOUR (1982-1992) an original music band based in San Francisco, performed and recorded music influenced by rock, jazz, poetry and improvisation. Conceptually influenced by Edgar Ulmer’s 1945 film noir classic of the same name, DETOUR ventured into a wide variety of genres with unexpected detours. 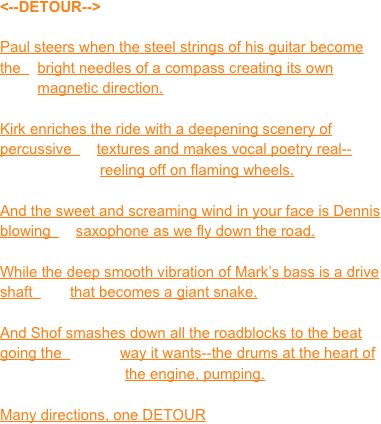 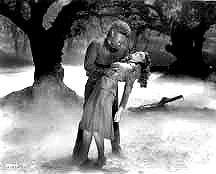 In 1984, Dennis, Kirk and Paul formed DETOUR as an alternative rock band with Bana Witt on vocals and David Andrews on bass. They performed original music in various San Francisco venues including the Mabuhay Gardens in North Beach.

Talking To My Brain

DETOUR was created by Dennis Mackler, Paul Mills and Kirk Lumpkin, musicians and poets whose lives converged at the Intersection for Religion and the Arts in San Francisco as conscientous objectors during the Vietnam war.

They originally performed as a trio called The Flamingo Room Orchestra playing a mix of jazz standards and original compositions.